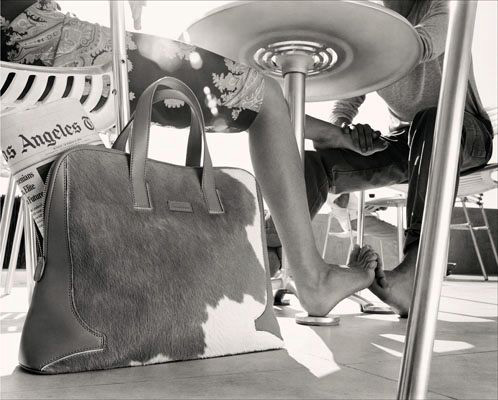 “You promised me you’d behave and look at you, we haven’t even ordered lunch and you’re actin’ up already,” she says to him under her breath while holding in her laugh, trying not to be noticeable to the other café patrons, her foot securely wrapped in his hand.
“Hey, you’re the one with the strict PDA rules. I never said I could totally buy in. Besides, some rules are made for breaking, right?”
Her long-upheld policy of no public displays of affection was now being tested like few other times.
“Am I violating policy?” he asks rhetorically, the foot rub feeling much better to her than it should.
“Yes, absolutely.”
“Want me to stop?”
“No,” her lips shoot back uncontrollably.
Their laughter melds as if in harmony.
“You’ve seen the Vegas commercial, right?” he says whimsically. “‘What happens there, stays there?’”
She nods affirmatively.
“Well, what happens under the table, stays under the table,” he alludes, as the game of footsies intensifies.
“So, what’d you decide about facebook? It goes public later this month. You want to get in on the shares?”
“For sure,” she confirms. “But friends of mine aren’t so gung-ho about it. They think the network will only fade like MySpace. And I hear so much grumbling about the timeline conversion . . . .”
“Are the people who’re grumbling about it, grumbling on facebook?”
She releases a knowing smile as she takes in his gaze—that look he gives off in his eye when his hunch about a business or money opportunity is more than a notion.
“They bought Instagram recently for a cool billion and they’re scooping up patents like a gold rush,” the gleam in his eye piercingly attractive. “Steve Jobs is no longer with us and that creative space has got to be filled by a new, young visionary.”

“Zuckerberg, right?” she offers.
“Looks that way. Remember when Google went public a few years ago at just under a hundred per share?”
“I know, I missed that boat.”
“Google’s over $600 per, now.”
“Must you remind me?”
His grin doesn’t anger her. He didn’t miss the boat, but sold too early.
“Why don’t we sell the truck and just use your car for the time being . . . it gets much better gas mileage.
And invest in the shares?”
She likes the idea. She mostly telecommutes from home anyway, and he’d paid the loan off for her recently.
“We’ll split the profits evenly, right?” she says in jest.
“Tell you what,” he sees his reflection in the woman’s eyes, “sixty-forty, you.”
She lights up.
“Sweet. Why so generous?”
He draws a pen and scribbles the agreement on a table napkin. To codify not only his word but his love for her.
“Because,” he returns a warm, caring smile to her awaiting eyes, “it’s Pamper-Her-Friday, love.”
***
Pamper the woman and forever yours is her romance. –Rg2
Coming soon: “A Summer’s Romance” Collection by Rg2
© 2012 Pamper-Her-Friday by Rg2™