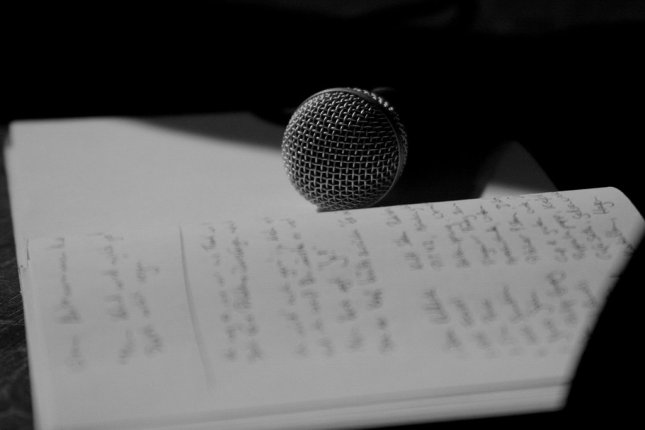 “She Unbuttoned My Shirt”

Your exit from the world was so painfully premature. But no worries, I’m taking care of mother. She knows she’s loved. Truth told, I believe she misses you awfully as well. She’ll never admit it. It matters not, for I see it in her eyes when we speak of you. Eyes don’t fib, do they?

It’s true: A woman will never forget how that one man made her feel.

That’s a universal truth. Something happened to me recently that was a gentle reminder.

I was invited to a spoken-word gathering the other night. Open microphone. I hadn’t planned to read; the warmth, vibe, eclecticism and creative milieu of the room was what I looked forward to. Sadness marked some of the readings. Anxiety resonated from many, considering the current political state of the country and the world. Spots of creative anger and humor rose from various voices. Song alongside acoustic guitar emanated from other performers. It was beautiful to be among.

Minutes before mic close, the call went out for a final read. Something within me moved, father. You. Mom. My many-years’ toil in writing like a mad man on the verge of breathlessness. The state of the world as I inhabit it.

My footsteps measured, I cut a path to the stage, phone in hand. Sure, I had poems of mine memorized. But I wanted to let go extemporaneously from my written words—in the raw. I wanted to hear my voice unrehearsed and share it with a listener, any listener.

A feather could’ve been heard in the moment I exhaled into the microphone.

I read the first few words . . . of that opening line. The most important line in all my works. I began something to the effect: “Intimacy is not disrobing a woman’s body. Rather, it’s clothing her naked fears . . . .”

My heart thumped like a man at the edge of a cliff. I dare not look down. But I did. I looked out into the audience after that first line. I swear, I heard a feather somewhere in the room. All eyes, unflickered and unblinked, were trained on this never-before-heard-of romance writer . . . reading with an audacity of love.

I approached each sentence measured, clear, confident, with an understated boldness. They were gonna hear me tonight. Whether they liked truthful romance be damned. I owned that mic for that moment. I laid bare my heart and soul.

I thought about you, father. And mother. I don’t know how many days I have left on this earth. But I’m writing my ass off as if there’s no tomorrow. That audience knew it. They felt it. My audacity. My pain. My hurt. My romance.

I closed my soliloquy with a slowed conclusion for emphasis. Bowed my head did I and thanked them for their time and attention. And left the building. I walked in a mocha kitten. I exited a black panther. Still bereft of his natural literary habitat. But a panther nonetheless.

I approached my vehicle. A soft voice called out to me: “Wait, Rg2.” A young woman with sparkling midnight eyes, a thick, natural, mesmerizing mane Esperanza Spaulding-like in style, a blended countenance of wonder, curiosity and desperation on her soft-featured face. My, father, she was lovely. I hadn’t seen her before.

“Where will you go now?” she let go. Her question was asked as if she had my answer.

Disbelief overcame me . . . before I gathered my stern defensive instinct.

“What?” incredulously I remarked.

“It’s not what you think. I just want to have a moment with you. In your surroundings,” she explained. “I know it sounds utterly crazy. My dad’s a police sergeant and I know you wouldn’t do anything untoward, not a man who writes and reads like what I just heard.” She didn’t take her eyes off me as she spoke.

This is fiction, my mind spoke silently to me, almost jokingly. This couldn’t be happening. But, for some reason, I didn’t detect weakness in her. No more than about 26, I gathered, she reflected nubiana strength of character—a princess’s hand-drawn exterior, yet, a queen’s unfoolish, royal interior.

She trailed my motorcar no more than three vehicle lengths the entire drive. As I navigated, the eerie notion crept into my consciousness that this woman was somehow familiar with me, though we’d never met.

This had to be fiction. A writer’s fiction.

We arrived. Both of us sat in our respective vehicles as if waiting for the other to exit first. I don’t suffer strangers, even beautiful strangers. Was death upon me? Or something wildly, temptingly, erotically, exhilaratingly fun . . . upon me—but still potentially deadly?

I walked to her car and lifted the doorhandle. We both were noticeably nervous, I more than she. Just the same I was curious as to what the hell she wanted from me.

“Leave your vehicle running,” I commanded. She followed without incident. Funny, she hadn’t yet killed the engine even as I’d made my way to her window. We were of the same wavelength. As I approached my door, only a few paces from her park, I actually heard the engine die.

A hard-headed woman, I discerned. Just what I didn’t need.

I unlocked the door and allowed her gentleman’s entry, closed it without locking it.

“I’m gonna have a drink. What would you like?”

“No, thank you,” her eyes scaled the walls, my photos, and then rested on me.

She hesitated. “No, thank you.”

I poured a country Irish cream into an ice-filled glass and just as I had imbibed a sip, she gently grasped my drink and placed it on the countertop, on which I was easily leaning. Her eyes fixed on mine, then slowly lowered to my chest. We both could hear the other’s breathing.

She set her purse atop the counter, a word still unspoken, and extended her hands to my shirt, and methodically began to unclasp each button, stopping at mid-sternum. Closer she came, as if floating, only oxygen between us.

Father, the woman placed her hand into the warm opening of fabric and found the bare skin at the base of my neck, lowered her flattened palm astride my beating heart and pressed gently, purposefully. I could smell her fragrance; it rendered me speechless, entranced. She was equally enthralled.

With her opposite hand, this riveting stranger, this police sergeant’s stunning daughter grazed her fingers along my lips, as if reading braille in search of some secret code.

“What you did tonight,” she released softly, whispery, “it was so beautiful. I’ve never heard a man read like that, write like that.” I swear, a feather drop and exhalations were audible, father. She paused, stroked and pressed my mid-chest, all five fingers in full skin contact. And released.

She then turned away from my gaze and picked up her purse from the counter. She made her way to the door, held the knob and paused. I stood stationary in the very position she’d cast me upon enter, my eyes shadowing her without words.

She opened the door and disappeared into the starry, crisp, rain-visited, poetic night.

“Alexa, play Sade,” I requested of my personal artificially intelligent assistant. I retrieved my Irish cream which had by then settled into a nice, smooth blend with its ice mates. Still unsure what had just happened, a restless calm came over me. Compelled, I made my way to my computer. That first line, you know, the most important line in an Rg2 creative work, had to get out and see the light . . . before it was lost to mismemory.

I had a listener, father, that night. If only one.

I had apparently pampered a stranger. A beautiful stranger.

I love you, father.